AmsterCHEM released today a new CAPE-OPEN Unit Operation where the model can be written as a Python script. The simplicity of the Python language is appealing to many: reading Python is much like reading English. This is the reason why it is so easy to learn, understand, and code Python. At the latest CAPE-OPEN Annual Meeting, use of Python for developing process engineering models was repeatedly mentioned by participants as a must to have.

Prior to its official release, Martin GAINVILLE, from the Fluid Mechanics Department at IFP Energies Nouvelles had the opportunity to test rather extensively the Python CAPE-OPEN Unit Operation and here is his report (Disclaimer: the views expressed here do not necessarily reflect the views or policies of IFP Energies Nouvelles): “I was able to quickly and successfully use the Python CAPE-OPEN Unit Operation, starting with the examples provided by AmsterCHEM (Examples 1 to 11 worked fine, encountered an issue with example 12 while importing scipy.optimize Python package¹, and examples 13 and 14 need to be further looked at).

In addition, I prototyped a simple pipe with the Python Unit Operation, calculating pressure drop and heat exchange with the pipe surroundings on a 1D mesh and dealing with all the present phases. For the model, I relied on a previously developed Python script working with the Python CAPE-OPEN Thermo Import by AmsterCHEM. This Python Unit Operation was integrated into a COFE flowsheet where the pipe diameter (a parameter of the Python Unit Operation) was tuned using a controller to reach the output pressure specification (15 bar). Calculations were performed using either a TEA Property Package (PR: CO2 + WATER) or a Multiflash Property Package (CO2, H2O, DODECANE). 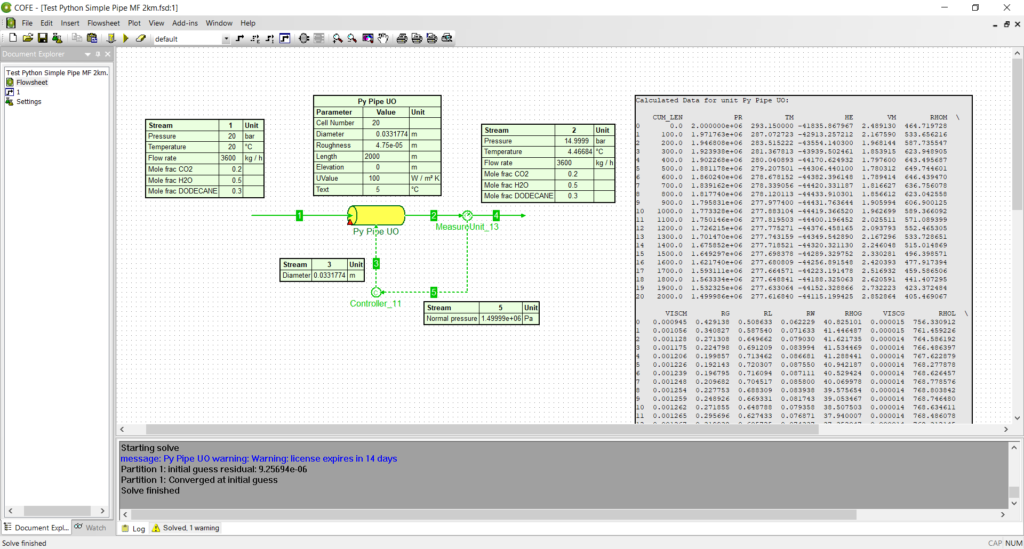 Pressure, temperature and phase fraction profiles were plotted in the Python Unit Operation GUI and calculation results were written into a report accessible to the flowsheet environment. 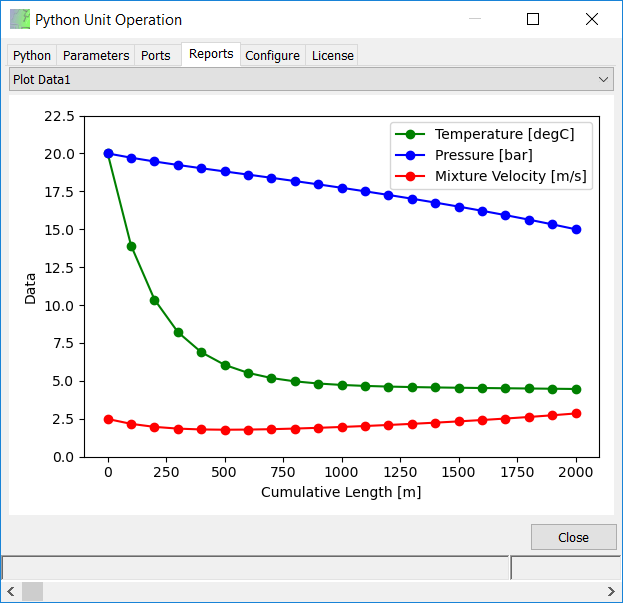 Martin GAINVILLE has not been the only one testing the Python CAPE-OPEN Unit Operation. Dr Volker SIEPMANN from Yara International (Disclaimer: the views expressed here do not necessarily reflect the views or policies of Yara International) stated to CO-LaN: “The release of the Python CAPE-OPEN Unit Operation by AmsterCHEM is very welcome. Jasper van BATEN was, as always, very helpful and responsive when I tested it. It worked practically out of the box, but Jasper used my feedback to allow for accessing unit operation code that is hosted as a Python module outside the unit operation code itself. This is a very useful feature for easing maintenance and avoiding code duplication.

Before this event, CAPE-OPEN technology was difficult for us to utilize, as our custom unit operation code is mostly developed in Python today. We never really succeeded to make a CAPE-OPEN COM PMC in Python. Now, with the Python CAPE-OPEN Unit Operation (actually being the C++ COM server and calling Python code in its own Python engine instance), this door is re-opened again.”. Volker attended the CAPE-OPEN 2016 Annual Meeting and keeps himself aware of CAPE-OPEN developments.

CO-LaN welcomes this new addition to the list of available CAPE-OPEN Unit Operations. This will further increase the use of CAPE-OPEN based interoperability in process engineering. It is worth noting that AmsterCHEM used COBIA for the development of this new Unit Operation.