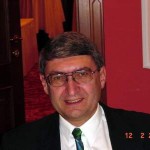 Hans-Horst MAYER is a founding Member of CO-LaN in 2001. He previously worked for BASF and was involved in the CAPE-OPEN and Global CAPE-OPEN projects.

Hans-Horst advocated for an open process simulation environment at the FOCAPD 94 conference as well as in a paper co-authored with colleagues of major German chemical companies, presented at ESCAPE 5 in June 1995.

With his BASF colleague Harmut SCHOENMAKERS, his paper presented at ESCAPE-8 in May 1998 (Brugge, Belgium) recognized that CAPE-OPEN was progressively fulfilling the need perceived by the chemical industry that process simulation software should interoperate. This paper helped communicating on the outcome of the CAPE-OPEN project.

Hans-Horst is the recipient of the CAPE-OPEN 2003 Award.