On April 2, 2009, the CAPE-OPEN community present at the 6th CAPE-OPEN European Conference gathered to congratulate the recipient of the CAPE-OPEN Award 2008 presented by CO-LaN to Dr Bill Barrett. 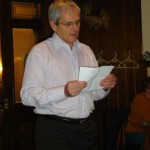 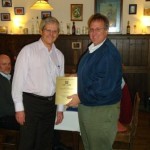 The Award was presented to Bill (on the right) by Claude Mabile (on the left), IFP representative on CO-LaN Management Board.

Claude Mabile’s entire address:
“I don’t know if it is the usage of the CAPE-OPEN community but as a new comer on the Management Board, I was asked to deliver you a speech tonight. Being involved only recently in the CAPE-OPEN standard development, the task of giving tonight the 2008 CAPE-OPEN Award seemed at first look hard but thanks to different persons and also to Internet, I could recover some information about the person we will honour tonight. However I hope he will excuse me if I make mistakes or forget some important facts.
William Bill Barrett is a chemical engineer. Since 2001 he has worked with the US Environmental Protection Agency, Sustainable Technology Division on applications of Computer-Aided Process Engineering aimed at improving the environmental performance of chemical processes. I don’t know exactly when he assessed the importance of the CAPE-OPEN standard but Bill has been very active to help diffuse the standard in different ways.
Bill played a crucial role in organizing the first CAPE-OPEN US meeting in August 2004: 35 peoples participated to this meeting organized by US EPA. Since then he kept being active either in organizing, in giving papers or in being chair of sessions of the entire four next CAPE-OPEN conferences which took place so far in the US.
Bill was also the first to create a CAPE-OPEN compliant PME called MFFPT for Metal Finishing Facility Pollution Prevention Tool. This platform was developed to help manufacturers and product providers to better design the process of surface finishing of metallic components. By using the CAPE-OPEN standard and developing this platform, Bill made it available at low cost to the industry. Thus Bill plays also an important role in reducing pollution induced by these treatments. Therefore we can say that this is an example of where the use of CAPE-OPEN standard helps to reduce pollution, thanks to Bill.
Bill also developed a CAPE-OPEN class library which can be used to develop process modelling components (PMCs) that may be used in any CAPE-OPEN-compliant simulation package. I must say that I read the PDF describing on how to create a mixer and I have been impressed how well documented it is and how easy it seems to create a PMC.
Finally Bill is active in enlarging the use of the CAPE-OPEN standard by giving training courses. Bill has served as instructor in various CAPE-OPEN tutorials (Heidelberg-2007, Salt Lake City-2007, Cambridge-2008) and he will be tomorrow one of your instructors.
Thus it is an honour for me to give, in the name of the Management Board and the whole CO-LaN community, William Barrett the 2008 CAPE-OPEN award in recognition of his activity to ease the use of the CAPE-OPEN standard by the industry.”

Bill received the CAPE-OPEN Award during the CAPE-OPEN dinner hosted at Weissbräu Huber in Freising where generous food and good beer helped in creating a cheerful atmosphere. 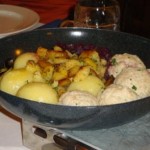 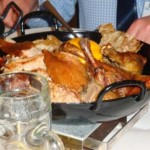 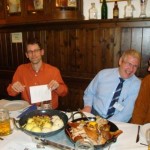 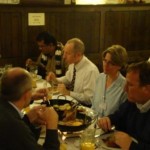 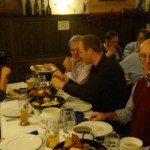 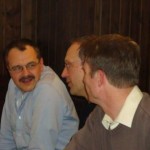