CO-LaN Management Board has awarded the CAPE-OPEN 2012 Award to Daniel WAGNER for the first implementation of CAPE-OPEN interfaces in a process modelling environment distributed as open source.

The recipient name was announced during the conference dinner of the CAPE-OPEN 2013 Annual Meeting on September 18, 2013. Daniel WAGNER had not been able to make the trip to France in order to attend the CAPE-OPEN conference. So the award plaque was presented to César PERNALETE of PDVSA Intevep who gave the next morning a presentation on how PDVSA Intevep makes use of DWSIM, the open source process modelling environment developed by Daniel WAGNER. César arranged for presenting the award to Daniel. 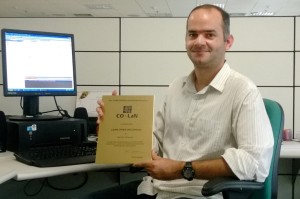 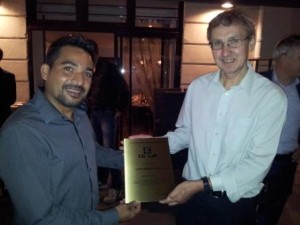 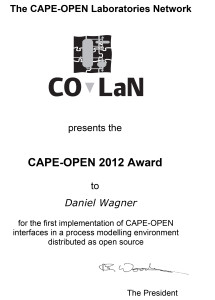 Daniel WAGNER is located in Manaus, Brazil. He is an Associate Member of CO-LaN since April 2011. He can be followed on the CAPE-OPEN forum as DanW. Here is Daniel’s first reaction to the announcement: “You can’t imagine how happy I am right now… thanks for recognizing the work done in DWSIM. It wasn’t easy but I did it with much pleasure, hoping that DWSIM would be able to communicate with other tools seamlessly as it does now.”